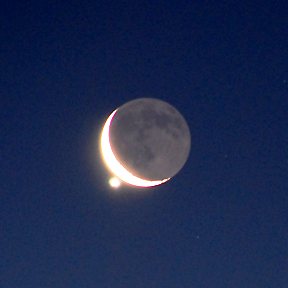 In this rare photograph, taken at 4 a.m. at our Sedona retreat center, Venus appears to kiss the Moon during an April 2009 gathering of indigenous elders discussing, among other subjects, the Mayan prophecies. You might wonder what this astronomical phenomenon has to do with the predicted 2012 consciousness shift.

Most “educated” people seem quite unaware of the relevance the indigenous worldview might have for the rest of us. We have been taught to think of such things as “primitive”, or “mere superstition.” Furthermore, the whole idea of some future evolutionary upward leap in consciousness is dismissed as absurd by the vast majority of the world’s left-brain intelligentsia, scientists very much included. This despite the fact that science itself firmly believes that we have made such evolutionary upward leaps in the past! How else did we get to our present state from Australopithecus? Or was there no fundamental difference between the consciousness of Lucy the hominid and that of Einstein the genius? Current science is profoundly confused on this issue, yet clings tenaciously to its less-than-coherent dogmas.

However, a relative few, numbering in the severals of millions, inspired by the thinking of Pierre Teilhard de Chardin (The Future of Man), by the writings of futurists like Barbara Marx Hubbard (Conscious Evolution) and by the vision of the indigenous peoples, think that an evolutionary upward  leap is a real possibility. We can even get involved on an inner level, and make a personal contribution to the shift. That, in a nutshell, is what The Trust Frequency book is about. Aside from liberating ourselves from fear and delusion, by adopting the ideas in the book, we contribute to the overall evolution of our species, and ultimately of the entire Universe.

Now that the long-predicted date, December 21st, 2012, has come and gone without any obvious apocalyptic events or even any discernible shift in human behavior, we have the ask ourselves the question: did anything actually happen, or was it all an illusion? Was there really a 2012 consciousness shift? What if this is just the beginning? What if we are at the dawn of the most profound shift in human consciousness since we swung down from the trees and drove off in our Ferraris?

What do you think?

Posted by Andrew Cameron Bailey
Participate in the 2012 Consciousness Shift. Join the conversation!
Read the Trust Frequency book. Watch our film In Search Of The Future.
Post a comment or e-mail us at TRUST@TheTrustFrequency.net