Would you like to live in a world of Love and Trust? Do you want to raise your Vibrational Energy and your Happiness? Are you seeking Universal Laws and Spiritual Principles for Evolutionary Self-Discovery? If so, you’ve come to the right place! Welcome to the Trust Frequency!

What is the Trust Frequency?

Thanks in large part to quantum physics and indigenous wisdom, we now know that the model of reality that drives the “civilized” world is limited, incomplete, and in many ways just plain wrong. It ignores fundamental laws of the Universe, and has resulted, inevitably, in the conflicted world we see today. Can we do anything about the situation? The answer is an unqualified YES!  Andrew Cameron Bailey 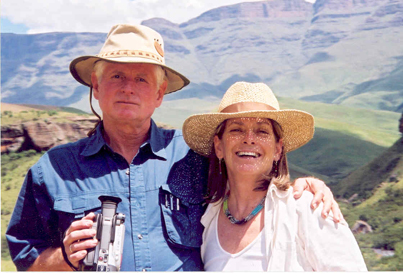 Authors Andrew Cameron Bailey and Connie Baxter Marlow on location in the Drakensberg Mountains, South Africa, during the filming of their movie “IN SEARCH OF THE FUTURE: What Do The Wise Ones Know?

Big-picture thinkers, authors, filmmakers and futurists Andrew Cameron Bailey and Connie Baxter Marlow share discoveries gleaned from two lifetimes of experience on the quest for humanity’s higher consciousness. Andrew grew up in South Africa amidst the Zulus, and befriended the Kalahari Bushmen. Connie was raised in Maine in a family of politicians and philanthropists that championed the earth, water, women and animals. Andrew became a science professor and his journey took him on the Sufi path, Connie’s brought forth visionary Native American elders.

Before meeting in 2003, Connie and Andrew had reached similar conclusions: there’s a split in the human psyche caused by erroneous assumptions about the nature of the Universe. They discovered that the indigenous connection to the Conscious Loving Universe is supported by cutting edge quantum science; that a synthesis of the two reveals a paradigm of trust and personal power that brings individuals into a higher frequency and expanded reality, beyond anything we can fathom with minds conditioned to believe that the frequency of scarcity and separation is the only option.

WHAT ELSE DO WE OFFER?

We have developed a large body of inter-related work, all focused on the evolutionary upward spiral: The Trust Frequency, In Search Of The Future, The First Fifty Years, The American Evolution. Click on the images to the right to learn more about each project.

CLICK HERE to buy the THE TRUST FREQUENCY book.
Get your signed copy and a link to the companion film:
IN SEARCH OF THE FUTURE: What Do the Wise Ones Know?
Explore our online course: THE DANCE OF SOULS: The Relationship (R)Evolution
A life-changing application of The Trust Frequency principles to our relationships with ourselves, parents, co-workers, children and The Loving Universe!
Get the FREE eBook: “THE CONSCIOUS LOVING UNIVERSE: A Guidebook”