To purchase a signed copy of the 1972 or 1999 Editions of
“Greatest Mountain: Katahdin’s Wilderness”
Click Here 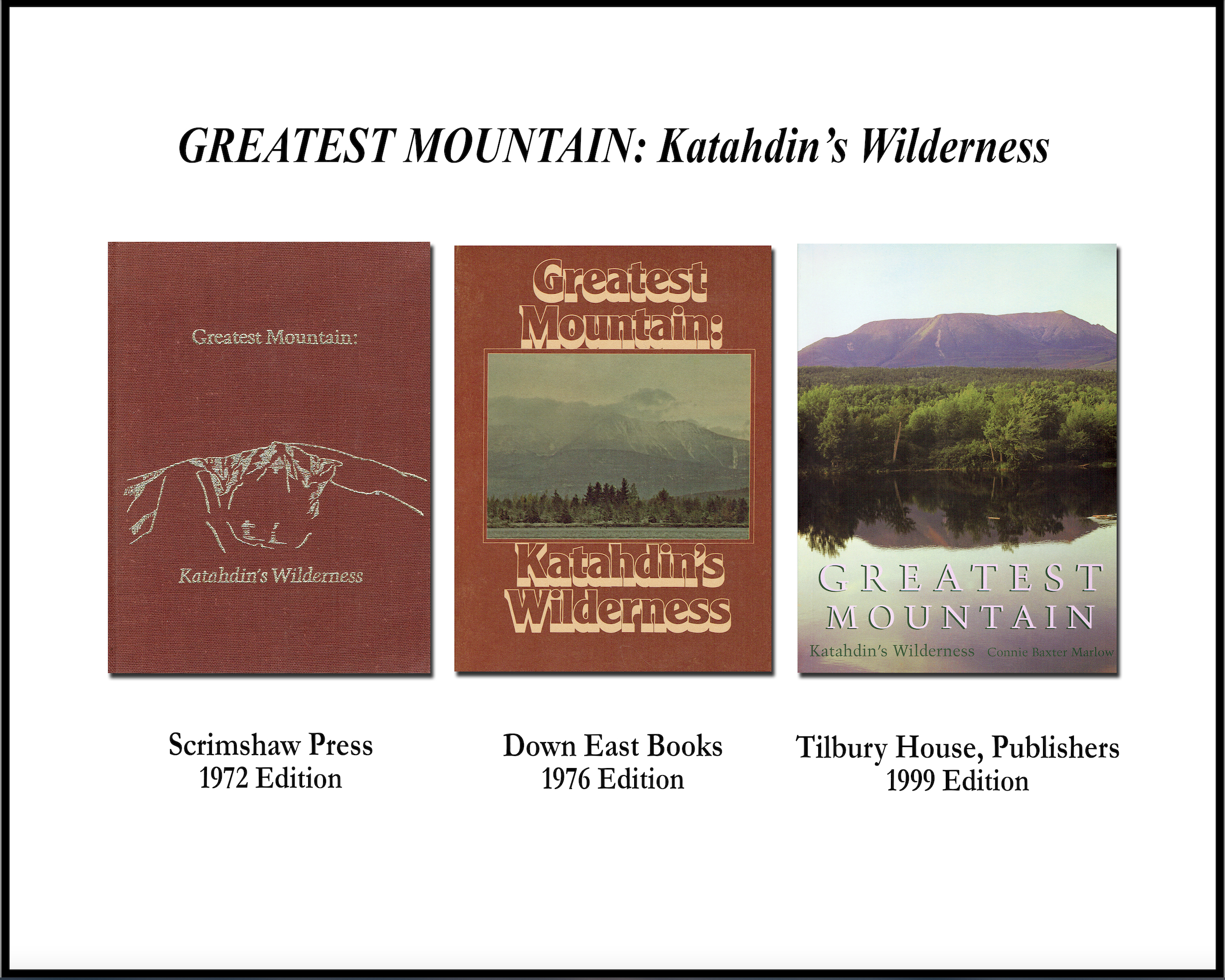 Greatest Mountain: Katahdin’s Wilderness – cover description. 1999 edition
Nearly thirty years ago, Connie Baxter Marlow created a book of photographs that presented Percival Proctor Baxter’s vision of a solution to the man/wilderness dichotomy.  In the establishment of Baxter State Park, Percy Baxter created a way for man and wilderness to enrich each other in a mutually beneficial way.  Her book celebrated the magnificence of Katahdin and its surrounding 200,000 acres, which her Great Uncle Percy had given to the people of Maine.

Connie Baxter Marlow has revisited Baxter State Park, both with this revised edition of her book of stunning photographs and in her thinking about Katahdin, her Uncle Percy’s philanthropy, and the Native American connection to their sacred mountain.  the park itself remains relatively unchanged, in delicate balance between the deeds of trust that were intended to keep it “forever wild as a public park,” and the pressures of modern-day recreation.  In new contributions to the book, Neil Rolde, Judith and John Hakola, and Park director Buzz Caverly place Percy Baxter’s legacy in historical and contemporary context, while Percy Baxter’s own words remain to convey his thoughts and wishes.

Penobscot Elder Arnie Neptune and documentary writer Dennis Kostyk bring in the Native American worldview that broadens and adds depth to the Western view of man’s connection to the natural world.  In a growing understanding of Native American beliefs, Marlow now suggests a fresh outlook to her readers: In times of great change, when the future is unknown, a new point of view can perhaps serve to lift one’s thinking above the clouds, where a clear mind and an open heart will see and feel a world it never knew was there.

Katahdin raises its head aloft, unafraid of the passing storm, and is typical of the rugged character of the people of Maine. The establishment of Baxter State Park will lay the foundation of a policy whereby the present generation will deliver a great inheritance to the generations to come (PPB, 1921)

Connie Baxter Marlow was raised in Pittsfield, Maine, and after attending Dana Hall School in Wellesley, Massachusetts, and Wheaton College, graduated from the University of California at Berkeley in 1968 with honors in Economics.  Connie’s family history of public service and philanthropy has significantly shaped her worldview, and in 1991, she founded Friends of Earth People, a foundation dedicated to creating forums for the dissemination of Native American knowledge with the intent of discovering important information that she believes is lacking in the dominant belief systems today.  She also co-founded Parents for Choice in Education, which pioneered work on a paradigm-shifting model called “The Aspen Model.”  Connie, a writer in her spare time is the mother of three children and divides her time between Colorado, California, Mexico and Maine.