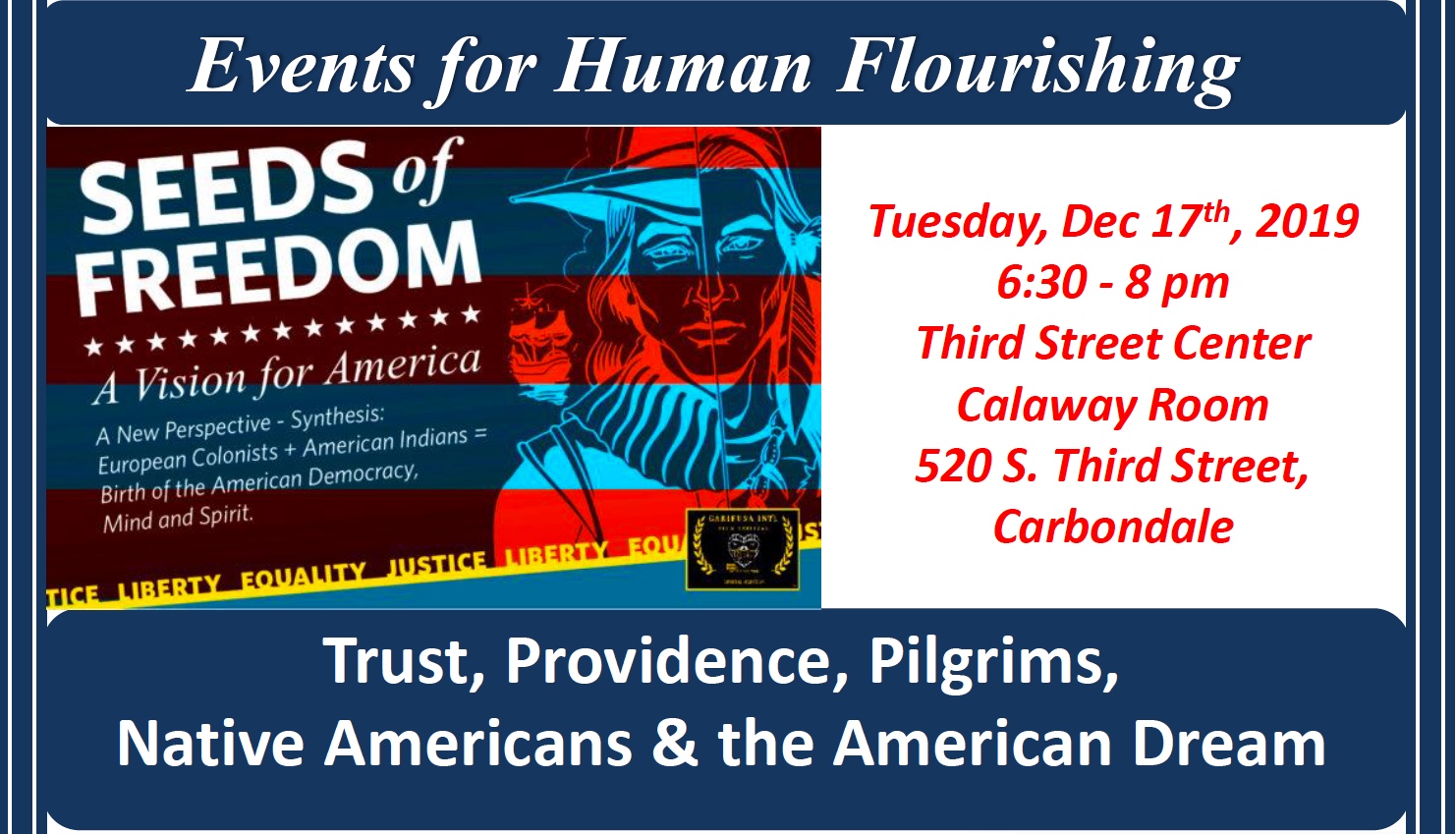 As we approach 2020 – the 400th anniversary of the landing of The Mayflower and the First Great Synthesis between Europeans and the American Indian – we have the opportunity to look at American history through a new lens – the role of the US of A in the evolutionary upward spiral of human consciousness. Yes the US of America. All of US and the role we are going to play in realizing the original vision of the human potential to bring liberty, justice, equality and abundance for all: The True American Dream!
Synthesis: A New Perspective
An extraordinary exception to the human condition unfolded when the visionary leaders of two radically different cultures met and worked together to maintain an inter-cultural exchange that became the “First Great Synthesis” between Europeans and American Indians during the first fifty-four years at Plymouth Plantation. This melding gave birth to American democracy and to the American mind and spirit. The “Second Great Synthesis” occurred when aspects of The Great Law of the Iroquois were integrated into the United States Constitution in 1787. A third synthesis is possible as our cultures come together again to realize the great promise America made to the world in its freedom documents The Mayflower Compact, The Declaration of Independence and The U.S. Constitution.
They will be screening their film “SEEDS OF FREEDOM: A Vision for America” Liberty! Justice! Equality! A new perspective presents a revolutionary look at the syntheses between European colonists and the American Indian in the evolution of the American democracy, mind and spirit.
Watch the Film: SEEDS OF FREEDOM: A Vision for America

Andrew Cameron Bailey and Connie Baxter Marlow are authors, filmmakers, futurists and inventors who share an uplifting vision of the future of humanity. Their book “THE TRUST FREQUENCY: Ten Assumptions for a New Paradigm” and film “IN SEARCH OF THE FUTURE: What do the Wise Ones Know?” bring together indigenous cosmology, quantum science and Eastern and Western mysticism to present tools for living in alignment with the true American dream: liberty, justice and abundance for all. They have produced a 5-part film series “THE AMERICAN EVOLUTION: Voices of America” which features Henry David Thoreau, a Thoreau Scholar, Penobscot Tribal Elders, a Muslim Imam, Mt. Katahdin and others. Their First Fifty Years Project which includes the film “SEEDS OF FREEDOM: A Vision for America” and the novel/screenplay “The Mayflower Revelations” brings forth a new inspiring perspective on the founding of The United States. Their Climate Restoration Project includes inventions to restore Earth’s climate to its pre-industrial state.