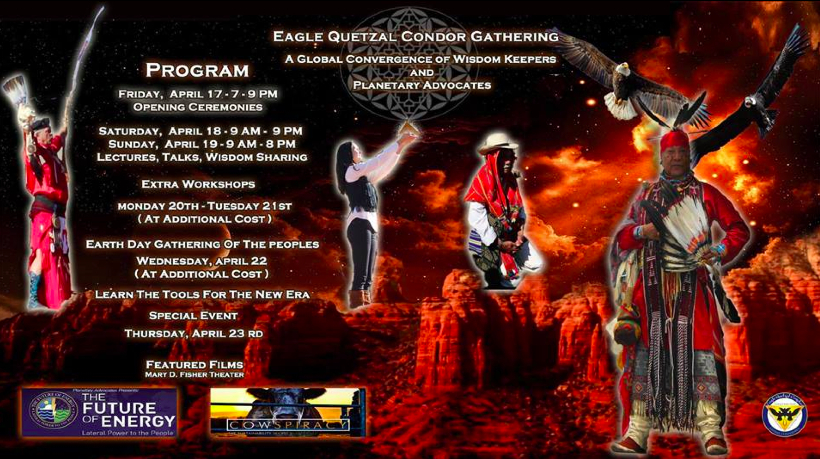 Authors, filmmakers and futurists Andrew Cameron Bailey and Connie Baxter Marlow will share discoveries gleaned from 137 years on planet earth: two lifetimes of experiences, encounters and friendships on the quest to humanity’s  higher consciousness. Andrew was raised in South Africa amidst the Zulus and befriended the Kalahari Bushmen. Connie was raised in Maine in a family of politicians and philanthropists that championed the earth, water, women and animals. Andrew became a science professor and his journey took him on the Sufi path. Connie’s brought forth visionary Native American elders.

They both reached similar conclusions: there’s a split in the human psyche caused by erroneous assumptions about the nature of the universe. They discovered that the indigenous connection to what Connie and Andrew have dubbed “the conscious loving universe” is now being verified by cutting edge quantum science; that a synthesis of the two creates a paradigm of trust and personal power that brings individuals into a higher frequency and expanded reality where our soul’s destiny awaits and there is more balance, beauty, joy and abundance than we can fathom with minds conditioned to believe that the frequency of scarcity and separation is the only option. Read more about Connie and Andrew’s journeys. https://thetrustfrequency.net/prefaceauthors-stories/

They are authors of “THE TRUST FREQUENCY: Ten Assumptions for a New Paradigm” , a handbook to higher consciousness on the “High Road to Happiness.” The Ten Assumptions are a unique synthesis of indigenous cosmology, quantum science and Eastern and Western mysticism. The book is a companion piece to their film “IN SEARCH OF THE FUTURE: What do the Wise Ones Know?  Watch it online HERE. http://bit.ly/ISOTFOnline